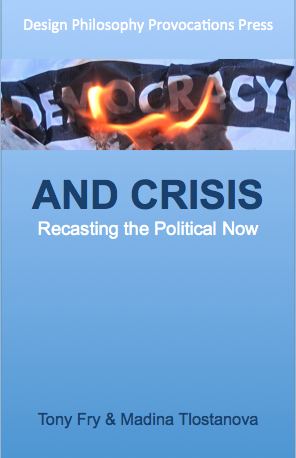 At the time of writing the world is in the grips of Covid-19 - a fast crisis. Dominantly viewedas a health crisis in which tens of thousands have died it has also powered social, economic, and political disasters. Climatically, biologically and geopolitically crises stretch out before us all no matter where in the world we are. There is a real possibility that the scale of some of these crises will be beyond the economic means of even wealthy nations. Covid-19 can be seen as a precursor to this prospect. It has taken what Carl Schmitt called 'a state of exception'; to a new level. The closure of borders, the shutting down of the large sections of the economy, the restriction of movement, the militarisation of the means of social control all de facto meant that democratic process, by degree globally, was effectively and swiftly suspended.

Although democracy, especially in its representative parliamentary form, gets designated and presented as the most highly developed form of political life and as the most advanced political ideology by its defenders, when confronted by the prospect of massive crisis, even the prospect of the extinction of our, and a vast number of other, species it is exposed as wholly deficient. Democracy, in so many ways has become the administrative instrument of neo-liberal agent of the economy of unsustainability (the unlimited development of capitalism). In so many ways politics has become the negation of the political.

This book explores these issues in detail and considers how to think beyond them.